Why Be Catholic? - What does it mean to be Catholic?

What does it mean to be "Catholic"?

In a sense, it is true that if you are a baptized believer in Jesus, you are already a member of the Body of Christ, and the Holy Spirit certainly can work through you and your community in furthering the work of the Gospel. As the Church teaches:

"All who have been justified by faith in Baptism are incorporated into Christ; they therefore have a right to be called Christians, and with good reason are accepted as brothers in the Lord by the children of the Catholic Church." (CCC 818)

"Furthermore, many elements of sanctification and of truth are found outside the visible confines of the Catholic Church: the written Word of God; the life of grace; faith, hope, and charity, with the other interior gifts of the Holy Spirit, as well as visible elements. Christ's Spirit uses these Churches and ecclesial communities as means of salvation, whose power derives from the fullness of grace and truth that Christ has entrusted to the Catholic Church. All these blessings come from Christ and lead to him, and are in themselves calls to 'Catholic unity.'" (CCC 819)

However, the One Church that Christ has founded truly is the Catholic Church, united and governed by the successor of Peter, the pope. In it alone can be found "the fullness of the means of salvation": 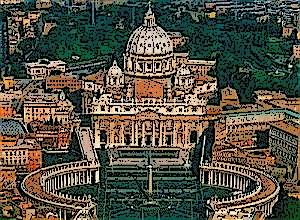 "The sole Church of Christ [is that] which our Savior, after his Resurrection, entrusted to Peter's pastoral care, commissioning him and the other apostles to extend and rule it. . . . This Church, constituted and organized as a society in the present world, subsists in the Catholic Church, which is governed by the successor of Peter and by the bishops in communion with him... For it is through Christ's Catholic Church alone, which is the universal help toward salvation, that the fullness of the means of salvation can be obtained. It was to the apostolic college alone, of which Peter is the head, that we believe that our Lord entrusted all the blessings of the New Covenant, in order to establish on earth the one Body of Christ into which all those should be fully incorporated who belong in any way to the People of God." (CCC 816)

As we will see below, by remaining outside of the Catholic Church you therefore remain only in partial and imperfect communion with the Messiah's Church, and you are missing out on many of the great blessings that God wishes to give you:

"The Church knows that she is joined in many ways to the baptized who are honored by the name of Christian, but do not profess the Catholic faith in its entirety or have not preserved unity or communion under the successor of Peter. Those who believe in Christ and have been properly baptized are put in a certain, although imperfect, communion with the Catholic Church." (CCC 838)

Let us now examine some of these blessings that God wishes to give you through His Church. [For an in-depth study of the "fullness of the means of salvation" and "all the blessings of the New Covenant" offered by the Church, see Catholics for Israel's Online Course]