This article assumes that you already are a Christian, a Messianic Jew, or believer in Yeshua (Jesus), however you wish to call yourself. See the last page of this article for links to articles that may be more relevant to you if you do not believe in Jesus.

Perhaps you think that the idea of becoming Catholic is the most absurd idea you have ever heard.

Perhaps you think that the Bible alone is sufficient for you to know God's will for your life.

Perhaps you think that God is not interested in 'religion' or institutions but merely wishes to have a personal relationship with you.

Perhaps you think that the only thing really necessary to be saved is to receive Jesus into your heart as Lord and Savior.

Perhaps you are Jewish and think that to become Catholic would amount to a betrayal of your Jewish faith and heritage.

Perhaps you even hold anti-Catholic views and think that Catholicism is a pagan corruption of the pure biblical faith.

Yet perhaps you feel that there is "something missing" to your faith.

Perhaps you feel that God has "something more" for you, but you haven't quite figured out yet what this is. 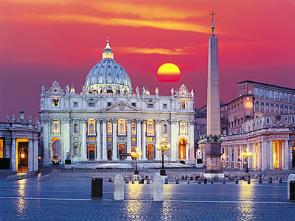 Looking back through history, from the first to the twenty-first century, from the ancient Mediterranean world to modern America, countless people have thought like you - either mildly curious, indifferent, distrusting or even despising the Catholic Church... until one day they decided to seriously investigate the Church's claims. Again and again, an inquiry which began out of curiosity or even animosity toward the Church ended as a wondrous love story: the story of a God so passionately in love with us that He offered His only Son to die for us in order that we may have eternal life, and formed his human family, the Catholic (universal) Church for the purpose of sharing with His children His own divine life, most especially in the sacrament of the Eucharist.

In this article, as well as through the other resources available on this website, you can discover how: