Why Be Catholic? - Outside the Church there is no salvation

An Eleventh Reason: "Outside the Church there is no Salvation"

Having reviewed ten reasons for entering the Catholic Church, it is worth examining an eleventh reason which logically derives from the first ten: the Church is necessary for salvation (though this statement needs to be understood correctly). Some of the Church Fathers expressed this in rather blunt statements. Cyprian of Carthage, for example, wrote in the third century: 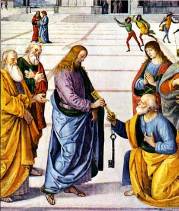 "On him [Peter] [the Lord] builds the Church, and to him he gives the command to feed the sheep… he founded a single chair, and he established by his own authority a source and an intrinsic reason for that unity. . . . If someone [today] does not hold fast to this unity of Peter, can he imagine that he still holds the faith? If he [should] desert the chair of Peter upon whom the Church was built, can he still be confident that he is in the Church?" (St. Cyprian of Carthage, De unit. 4; [A.D. 251])

Does this mean that anyone who is not formally Catholic, including believing Christians, cannot be saved? No. As we have seen above, if you are a baptized Christian in good faith, you are already in partial communion with the Catholic Church, and you are tapping into Jesus' saving power which He entrusted to the Church.

Objectively, the one Catholic Church which Jesus founded and to which He has given the fullness of truth and of grace is necessary for salvation: "Hence they could not be saved who, knowing that the Catholic Church was founded as necessary by God through Christ, would refuse either to enter it or to remain in it" (CCC 846). In other words, if someone feels genuinely convicted by the Holy Spirit of the truth of the Catholic Church, but willfully and stubbornly resists the Lord's leading and guidance to enter it, then he may indeed be endangering his own salvation.

Subjectively, however, the Lord is merciful and will not condemn those who are not aware, through no fault of their own, of the salvific nature of Christ's Church - and this includes most non-Catholic believers (already in partial, imperfect communion with the Church) who are not fully aware or do not adequately understand the Catholic Church's claims:

"Those who, through no fault of their own, do not know the Gospel of Christ or his Church, but who nevertheless seek God with a sincere heart, and, moved by grace, try in their actions to do his will as they know it through the dictates of their conscience - those too may achieve eternal salvation." (CCC 847)

Ultimately, it is Jesus who saves. The main question here is how does he save us? Is faith in Him enough? There is ample scriptural evidence* indicating that faith alone is not enough and that we will also be judged according to our works. Jesus also emphasized the importance of being baptized (Mark 16:16), of "eating his flesh and drinking his blood" (Jn 6:53-54), and of submitting to the authority of his apostles (Mat 16:19, 18:18, Lk 10:16, Jn 20:23) to receive his forgiveness and eternal life. This means that the fullness of Jesus' gifts has been entrusted to his Catholic Church. This does not mean, however, that Catholics are automatically in better standing with God than non-Catholic believers. On the contrary, Catholics who have received the fullness of truth and grace have a greater responsibility to bring forth fruits for the Kingdom: "to whom much is given, much will be required." On the other hand, there are many non-Catholic believers who live remarkable lives of faith, hope and love. God will surely not fail to reward them, provided they "persevere until the end" in seeking the truth, even if, through no fault of their own, they do not formally find their way into the Catholic Church.

God wants everyone to be Catholic?

What conclusion can we draw from all this? That God wants everyone to be Catholic so that they can have access to the fullness of His blessings and grace! As the Church teaches:

"To reunite all his children, scattered and led astray by sin, the Father willed to call the whole of humanity together into his Son's Church. The Church is the place where humanity must rediscover its unity and salvation. The Church is "the world reconciled." She is that bark which "in the full sail of the Lord's cross, by the breath of the Holy Spirit, navigates safely in this world." According to another image dear to the Church Fathers, she is prefigured by Noah's ark, which alone saves from the flood." (CCC 845)

Such as statement is not likely to be popular in our societies dictated by religious relativism and political correctness. In addition, you may think that the world would be a very boring place if everyone were Catholic. But this is not true: the fact that God is interested in everyone coming to the fullness of truth and salvation does not mean that He enjoys monotony. On the contrary, the unity of the Church leaves full room for the great diversity of peoples, cultures, customs and traditions of the world. "The great richness of such diversity is not opposed to the Church's unity" (CCC 814). Likewise, "the Catholic Church rejects nothing that is true and holy in [other] religions" (NA 2). And so there is ample room for Evangelical, charismatic and even Jewish spirituality and prayer within the one, holy, catholic and apostolic Church.