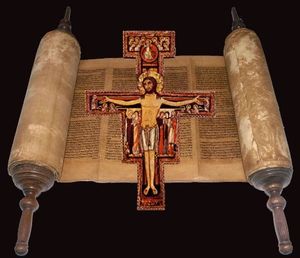 There are no disagreements between Judaism and Catholicism. Where their teachings diverge, it is because they apply to two different, well, let’s call them universes, two ways that human experience is unified (uni-verse, “turned into one”) in relation to G-d according to their respective covenants.

Most notable is their approach to grace, and the far greater emphasis on man’s helplessness without grace in Catholicism. The Covenant of Sinai  takes the natural vitality of man and sanctifies it by directing it to the service of G-d.  The New Covenant sanctifies the life of man by offering a new kind of vitality, a Divine Vitality, a Divine Life:  grace.  Judaism is very clear about it:  natural life takes precedence to holiness because holiness is the sanctification of natural life. Catholicism is less inclined to sacrifice holiness to natural life because, in Catholicism, holiness is participation in another kind of life: Divine Life.

That’s to put it simply. It’s not that simple.

The natural vitality of man could not be turned to G-d except by a Divine power, and it's hard to say how that power is different from the power of grace. On the other hand, the grace that confers a Divine Life also directs the Catholic’s natural vitality to G-d:  grace perfects nature.

Does that so neutralize the simple statement of the distinction as to make it wrong or, at least, misleading?

Misleading?  Perhaps. But not wrong, because it is the key to understanding why Jewish and Catholic piety diverge in certain typical ways.

Judaism is not ascetic. There is no place in Judaism for the consecrated life of a Poor Clare or a Trappist Monk. Our bold statement of the difference between Judaism and Catholicism makes the reason obvious:  Judaism doesn’t offer an opportunity to leave natural life for a Divine Life. It offers a way of turning natural life to G-d.

The New Covenant doesn’t require the faithful to keep the ritual commandments of Judaism. The reason is obvious: the hard work of keeping the commandments is directed to turning man’s natural life to G-d.  The Catholic doesn’t need to do that.  If he cooperates with the grace he receives, he will live a Divine Life that will subdue any natural inclination that would turn him away from G-d.

What would the Jew say about this?

What would the Catholic say?

What would the Catholic Jew say?

The Jew would say:  Few are the people who so cooperate with grace that they enter such a Divine Life, and the result of that is that they are left without any effective framework for sanctifying their natural lives.

The Catholic would say: The way of Judaism is fine, but imperfect, because it does not offer the Divine Life of Catholic faith, and although there is nothing wrong with the Jewish way, (a baptized Jew can keep the commandments without sin) , there is no advantage in it if he lives a dedicated Catholic life.

The Catholic Jew would say:

Catholic faith perfects Jewish faith by helping the Jew to live in a way that more closely approximates the ideals of Judaism. But it does not replace it. Indeed, it only gives the Jew more reason to cherish it, for Jewish observance is the only way of life (the only comprehensive culture) that is anchored, centered and directed to holiness.

The more profoundly I experience the Divine Life of grace, the more thankful I am to participate in the sacred tradition of Sinai which structures the cycles, routines and institutions of natural life so emphatically to G-d.  That creates a certain harmony between life in this world and the spirit’s yearning for the next which Catholics have often felt lacking.  It buttresses me and protects me in those dark nights of the soul that obscure the light of faith, and it creates many opportunities for the body to participate in the Divine Life that is the gift of Catholic Faith. If Catholic faith anticipates the joys of heaven, combined with the physical discipline of Jewish observance, it anticipates the resurrection of the body.