On Love and Authority

On Love and Authority 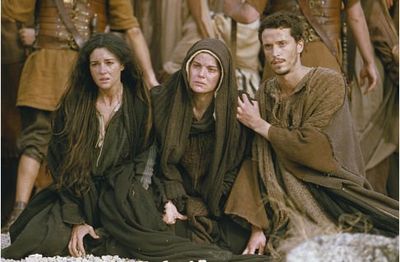 (But Mary's sister and Mary the wife of Clopas were also there....I wonder why. Neither of them is mentioned elsewhere in the Gospels. Perhaps to show us that there were those who truly loved him even though they  had no active role in the Gospel story. Their love alone placed them beneath the Cross and gave them a part in the history of salvation. Their presence reveals that it is only love and nothing else that gives the Christian a place at the foot of the Cross with Mary.)

It is interesting to contemplate the three very different ways that the Blessed Virgin, John, and Mary Magdalene loved Jesus: The Blessed Virgin, as mother and bride, John, the fiery disciple ("son of thunder") who, with purity of heart would ask to sit alongside Jesus in his glory, and Mary Magdelene, the humble repentent sinner whom Jesus redeemed from the clutches of the devil.

But why would Jesus assign Peter to lead the Church if he wasn't among those who were worthy to stand beneath the Cross?

Peter, who knew what only the Father could reveal, that Jesus was the Holy One of G-d (John 6:68) had only a few hours before (before the cock crowed) denied Jesus three times. He was devastated, for he had separated himself from Jesus rather than joined him in troubles. So he was not worthy at that moment to stand beneath the Cross.

Those who stood beneath the cross were the Mother of the Church, the saintly mystic (John) and the repentant sinner (Mary Magdalene). There is no guarantee that the office of bishop will always be filled by a John or a Mary Magdalene. Indeed, the authority of the office is not diminished even when the person who fills it is a sinner because it has nothing to do with the personal piety of the one who fills it. It’s foundation lies in the mystery of the sacrament of holy orders. That point might have been confused if Peter, the head of the church, had stood with the Blessed Virgin and John at the foot of the Cross.

I haven’t seen any commentaries on this, but it would seem that Jesus forgave Peter for denying him three times when Peter, in response to Jesus’ repeated questions, declared his love for Jesus three times (John 21). Notice that, each time he declared his love, Jesus assigns him the task of a Church leader: “Feed my sheep.”  The bishop has the difficult task of standing between a world that crucifies Jesus and the faithful who are his sheep. There are times when, facing a world so hostile to Christ and all who belong to him, the bishop may fall, as Peter did, into denying Christ. But so long as he, like Peter, weeps bitterly for his weakness and turns back to Jesus declaring his love, Jesus accepts him and reaffirms him in his office of feeding his sheep.