Pope: The Jews are still "the holy root that produced Jesus." 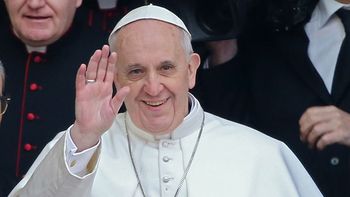 In a letter published September 12 by national daily La Repubblica, Di Segni, known for his very cautious attitude toward interreligious dialogue and his insistence on mutually recognized limits, said, “This Pontiff does not cease to surprise.”

He was referring to an article written by the pope and published September 11, 2013 in La Repubblica in response to challenging questions asked by Eugenio Scalfari, the paper’s cofounder and former editor, and a self-proclaimed “nonbeliever.”

Concerning Scalfari’s questioning as to whether God had actually kept his promise to Abraham and the People of Israel for prosperity and happiness, considering centuries of persecution culminating in the Shoah, Francis replied: “This is a question – believe me – that touches us profoundly as Christians, because with the help of God, especially since the Second Vatican Council [created 50 years ago], we have rediscovered that the Jewish People are still for us the holy root that produced Jesus.

“During all these years of friendship with our Jewish brothers in Argentina, I, too, have questioned God many times in my prayers, especially when my mind turned to the memory of the terrible experience of the Shoah,” declared the pope, who was born in Argentina, where he became archbishop of Buenos Aires in 1998 and a cardinal in 2001.

God never abandoned his covenant with Israel, and notwithstanding their suffering over the centuries, the Jewish People have kept their faith, the pope wrote.

“For this, we will never be sufficiently grateful to them as a Church, but also as human beings,” he continued. “In the persistence of their faith in the God of the Covenant, they summon all, including us as Christians, to recall the fact that we are awaiting the return of the Lord as pilgrims, and must therefore always remain open to Him and never retreat from what we have already achieved.”

In his published letter, Di Segni noted that while Francis’s words are not new but, rather, inherent to Christianity and confirmed by Vatican II, “it is the force with which he expresses them and his capacity of communicating them that is astounding. The fact that Judaism is the holy root of Christianity is fundamental, but many theological currents, especially in Protestantism, have tried to belittle them. In opposing these currents, Francis is coherent to the teaching of Benedict. Especially noteworthy is his expression of gratitude to Jews for their devotion in faith.”

Paradoxically, after centuries of Christian preaching against what they referred to as Jewish superstition and a vain expectation of the Messiah, Jewish, fidelity has become a “model for Christians and for humanity.

This is not improvised but a very significant turning point which Jews will have to take into account,” Di Segni affirmed.

In his Yom Kippur speech, published after sundown by national online daily Pagine Ebraiche, Di Segni again referred to the pope’s words, albeit without mentioning his name.

Speaking of the “special dignity” of the Jewish People, “which we assume grows in proportion to our fidelity to the Torah,” the chief rabbi specified that “in these strange times, in these very days, an authoritative external voice has reminded us of this – a voice paradoxically coming from a camp that has for centuries inflicted on us suffering, humiliation and offense precisely because we kept true to our tradition in the Messianic expectation.”

You also ask me what to say to our Jewish brothers about the promise God made to them:  Has this been forgotten? And this  -  believe me  -  is a question that radically involves us as Christians because, with the help of God, starting  from the Second Vatican Council, we have discovered that the Jewish people are still, for us, the holy root from which Jesus originated. I too, in the friendship I have cultivated in all of these long years with our Jewish brothers, in Argentina, many times while praying have asked God, especially when I remember the terrible experience of the Shoah. What I can say, with the Apostle Paul, is that God has never stopped believing in the alliance made with Israel and that, through the terrible trials of these past centuries, the Jews have kept their faith in God. And for this, we will never be grateful enough to them, as the Church, but also as humanity at large. Persevering in their faith in God and in the alliance, they remind everyone, even us as Christians that we are always awaiting, the return of the Lord and that therefore we must remain open to Him and never take refuge in what we have already achieved.