The Trinity is the central mystery of the Christian faith. The term describes the inner life of God, who is an eternal communion of Persons and a Family whose life is love. In more descriptive language, the Church describes the Trinity in the following words:

We firmly believe and confess without reservation that there is only one true God, eternal, infinite and unchangeable, incomprehensible, almighty and ineffable, the Father and the Son and the Holy Spirit; three persons indeed, but one essence, substance or nature entirely simple. (CCC 202)

Frank Sheed describes the Trinity in its barest outline as such:

Not surprisingly, this mystery is so puzzling that it has often been the central stumbling block for many to understand the Christian faith throughout 2,000 years of Christian history. Many would agree with Voltaire, who wrote in his Dictionnaire Philosophique:

Voltaire is right that the word "Trinity" does not appear in the Bible. His assertion that the doctrine of the triune God and the distinction of one essence and three persons are not to be found in Scripture, however, is quite wrong. In this article, we will examine the presence of the Blessed Trinity in the Bible, beginning with the Tanakh (the Old Testament), and then moving on to the New Testament. In the third section, we will add some selected quotes from the Church Fathers to document how faith in the Trinity was grasped in the early Church. 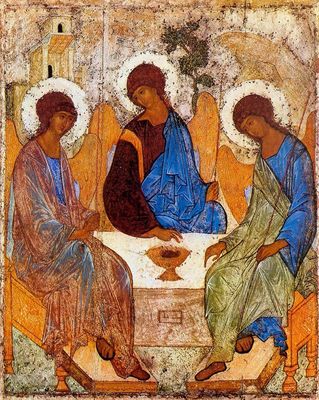 It goes without saying that we can only scratch the surface here in introducing the mystery of the Trinity, about which volumes upon volumes have been written. Yet the fact that we call the Trinity "a mystery" does not mean that it is something completely illogical and incomprehensible - and we had better not even try to understand it. A mystery is not a self-contradiction, but rather something that in fact can be known and understood, but only partly and dimly, and only because God has chosen to reveal it to us. As the Catechism of the Catholic Church tells us:

The Trinity is a mystery of faith in the strict sense, one of the mysteries that are hidden in God, which can never be known unless they are revealed by God. To be sure, God has left traces of his Trinitarian being in his work of creation and in his Revelation throughout the Old Testament. But his inmost Being as Holy Trinity is a mystery that is inaccessible to reason alone or even to Israel's faith before the Incarnation of God's Son and the sending of the Holy Spirit. (CCC 237)

One important question follows from this paragraph: if the Trinity is God's very essence, and He seriously cares that we know about it, then why has He not told us up front? Why has He not introduced Himself to us clearly from the beginning, rather than merely leaving vague "traces of his Trinitarian being in his work of creation and in his Revelation throughout the Old Testament"? St. Gregory Nazianzen, a Church Father of the fourth century, provides the answer:

The Old Testament has manifested the Father clearly, the Son only dimly. The New Testament has revealed the Son and implied the divinity of the Spirit. Today the Spirit lives amongst us and makes himself more clearly known. It would actually have been dangerous openly to proclaim the Son while the divinity of the Father was not fully acknowledged, and then, before the divinity of the Son was accepted, to add as it were the extra burden of the Holy Spirit... It was more fitting that by adding a little at a time and, as David says, by ascending from glory to glory, the splendour of the Trinity should shine forth progressively. (Gregory Nazianzen, Fifth Theological Oration, 31, 26).

We have seen in another article that Jesus, through his words and deeds, made claims to divinity. To put it more bluntly, Jesus claimed to be God - a shocking claim which was nonetheless accepted and affirmed by the New Testament authors and Church Fathers. We will not review these claims here, but do recommend the reader to read or review the article on the divinity of Messiah, as it constitutes the foundation for our current article on the Blessed Trinity.

Jesus is Distinct from the Father

Jesus claimed to be one with God. Yet he also revealed himself as being distinct from God the Father. Jesus called God "my Father"; he prayed to God. And the New Testament authors also distinguish between "God the Father" and "the Lord Jesus Christ":

Every one therefore who shall confess me before men, him will I also confess before my Father who is in heaven. (Mt 10:32)

And I will pray the Father, and he will give you another Counselor, to be with you for ever. (Jn 14:16)

Grace to you and peace from God our Father and the Lord Jesus Christ. (Rom 1:7)

At first sight it seems like Voltaire may be right: According to the Tanakh (the Old Testament), there is only one, transcendent God. But Jesus claimed to be God. He also claimed to be distinct from God the Father. How can these contradictory statements possibly be reconciled? If Jesus is God, but not the same person as God the Father, are they then two distinct “gods”? This would of course entirely contradict the most basic principle of the Jewish faith, the oneness of the Creator, as classically formulated by Maimonides: “I believe with complete faith that the Creator, Blessed is His Name, is unique, and there is no uniqueness like His in any way, and that He alone is our God, Who was, Who is, and Who always be” (Maimonides’ 13 Principles, 2).

Let us now see whether we can solve this puzzle.