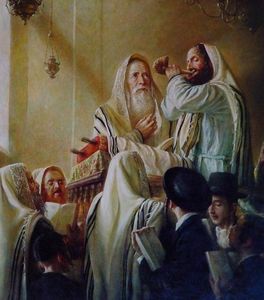 The life of Jesus came to close in the course of four great saving moments:

These four events correspond to the four Jewish holidays that we will be celebrating in the course of the coming month:

1. The Day of Judgement and Jewish New Year:  Rosh Hashanah

According to Jewish tradition, Rosh Hashannah falls out on the day on which G-d created Adam.  The central motif of the holiday liturgy is that G-d is King, the Creator and Ruler of the world.  It is considered the first of the Ten Days of Repentence, for, although the acts of confession which dominate the liturgy of Yom Kippur (the Day of Atonement) ten days later are lacking, the affirmation that G-d is King, and the interior act of submission that implies clearly warrant regarding it as the first of those ten days.  Because the liturgy of Rosh Hashannah is centered in the recognition of G-d’s Rule and submission to it, it corresponds to the declaration Jesus made in the  Garden  of  Gethsemane , “Not my will, but Thine be done.”

2.  The Day of Atonement:  Yom Kippur

Yom Kippur (The Day of Atonement)  is called a fast day, and, of course, it truly is, for no food or drink are consumed from before sundown, when the day begins, until after nightfall with the end of the day.  But the commandment of the day—a Biblical commandment—makes no mention of fasting.  Rather, we are commanded to afflict ourselves.

On the tenth day of this seventh month is the day of atonement; it shall be for you a time of holy convocation, and you shall afflict yourselves and present an offering by fire to the LORD. And you shall do no work on this same day; for it is a day of atonement, to make atonement for you before the LORD your God. For whoever is not afflicted on this same day shall be cut off from his people.  (Lev 23:27-29)

Fasting is the most difficult of several afflictions which the halachah requires: not to wear leather shoes, not to wash (except to remove dirt, and then in a way that avoids pleasure), not to have conjugal relations, and not to anoint ourselves with oils. (The weak,  the ill and nursing mothers are, of course, permitted to eat and drink as required.)

Yom Kippur corresponds to the Passion of Jesus. On the Day of Atonement, we afflict ourselves, suffer and figuratively die with Jesus, who died on the Cross that our sins might be forgiven. The Torah requires us to afflict ourselves in order to enter a purifying, mystical union with the Suffering Son of G-d through whom our sins are forgiven.

3.  The Feast of Tabernacles:  Succoth

On the third day after the crucifixion, Jesus rose from the dead, ascending from his afflictions into the glory that revealed His Divinity.

On Succoth, which begins on the fifth day after Yom Kippur, the Jewish people are correspondingly exalted and commanded by G-d to dwell with Him in a kind of Temple. That the booths in which we dwell on Succoth are, indeed, a kind of  Temple , a seat for the Presence of G-d,  is clearly suggested by the Talmudic discussion of the Succah (Babylonian Talmud Tractate Succah 4b).

The holiday of Succot corresponds to the Resurrection.

All the preceding holidays were associated with distinctive rituals and commandments: blowing the shofar (ram’s horn) on Rosh Hashannah, fasting on Yom Kippur, dwelling in the succah and a ritual waving  of a palm branch, citron, hyssop branches and weeping willow branches while holding them together as a single bundle.  On Succot, many special sacrifices were offered in the  Temple , including sacrifices for all the nations of the world. Shmini Atzeret is different.  There are no special commandments, and the only special offering is a single ox.  There is a post Talmudic custom of celebrating with the Torah during the morning and evening synagogue services of the second day of Shmini Atzeret, singing and circle dancing while carrying Torah scrolls, and on account of that custom, Shmini Atzeret is also called Simchat Torah (The Joy of the Torah), but in the diaspora, where the holiday lasts two days, this custom is practiced on the second day only, and, as I mentioned, it is a custom,  not a Biblical commandment.

The rabbis suggest the elusive meaning of Shmini Atzeret with a midrash which compares G-d to a king who invited all the country’s inhabitants to a festival he held for seven days. After it was over, He said to his friends, now that they have departed, let us relax together. Shmini Atzeret is the culmination of the theme of atonement and reconciliation that runs through the entire sequence of the four holidays.  Shmini Atzeret signifies the intimate, quiet, interior communion with G-d which is its final fruit.  It corresponds to the Ascension, when Jesus returned to the Father.

We see that the four holidays of this coming holiday season correspond to the events of Holy Week and the Ascension. They are a figure of the great salvific events which mark the last days of Jesus’ human presence in this world.  The Christian Jew participates in those saving events, and immerses himself in the Christian mysteries of salvation as he celebrates the Jewish holidays.