I thank you for your friendly and sincere words of greeting. This meeting was a deep need for me in the framework of this journey, and I thank you for fulfilling it. May God's blessing accompany this hour! 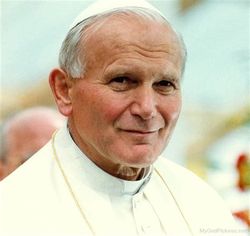 1. If Christians must consider themselves brothers of all men and behave accordingly, this holy obligation is all the more binding when they find themselves before members of the Jewish people! In the Declaration on the Relationship of the Church with Judaism in April of this year, the bishops of the Federal Republic of Germany put this sentence at the beginning: "Whoever meets Jesus Christ, meets Judaism." I would like to make these words mine, too. The faith of the Jesus Christ, the son of David and the son of Abraham actually contains what the bishops call in that declaration "the total heritage of Israel for the Church" [11], a living heritage which must be understood and preserved in its depth and richness by us Catholic Christians.

2. The concrete brotherly relations between Jews and Catholics in Germany assume a quite particular value against the grim background of the persecution and the attempted extermination of Judaism in this country. The innocent victims in Germany and elsewhere, the families destroyed or dispersed, the cultural values or art treasures destroyed forever, are a tragic proof of where discrimination and contempt of human dignity can lead, especially if they are animated by perverse theories on a presumed difference in the value of races or on the division of men into men of "high worth," "worthy of living," and who are "worthless," "unworthy of living." Before God all men are of the same value and importance.

In this spirit, during the persecution, Christians likewise committed themselves, often at the risk of their lives, to prevent or relieve the sufferings of their Jewish brothers and sisters. I would like to express recognition and gratitude to them at this moment. And also to those people who, as Christians, affirming they belonged to the Jewish people, traveled along the via crucis of their brothers and sisters to the end — like the great Edith Stein, called in her religious institute Teresa Benedicta of the Cross, whose memory is rightly held in great honor.

I would further like to mention also Franz Rosenzweig and Martin Buber, who, through their creative familiarity with the Jewish and German languages, constructed a wonderful bridge for a deeper meeting of both cultural areas.

You yourselves stressed, in your words of greeting, that in the many efforts to build up a new common life with Jewish citizens in this country; Catholics and the Church have made a decisive contribution. This recognition and the necessary collaboration on your part fills me with joy. For my part, I wish to express grateful admiration also for your initiatives in this connection, including the recent foundation of your Heidelberg University.

3. The depth and richness of our common heritage are revealed to us particularly in friendly dialogue and trusting collaboration. I rejoice that, in this country, conscious and zealous care is dedicated to all this. Many public and private initiatives in the pastoral, academic, and social field serve this purpose, as on very solemn occasions such as the recent one at the Katholikentag in Berlin. Also an encouraging sign was the meeting of the International Committee between the Roman Catholic Church and Judaism in Regensburg last year.

It is not just a question of correcting a false religious view of the Jewish people, which, in the course of history, was one of the causes that contributed to misunderstanding and persecution, but above all of the dialogue between the two religions, which — with Islam — gave the world faith in the one, ineffable God who speaks to us, and which desire to serve him on behalf of the whole world.

The first dimension of this dialogue, that is, the meeting between the people of God of the Old Covenant, never revoked by God [cf. Rom. 11:29], and that of the New Covenant, is at the same time a dialogue within our Church, that is to say, between the first and the second part of her Bible. In this connection, the Guidelines for the application of the conciliar declaration Nostra Aetate say: "The effort must be made to understand better everything in the Old Testament that has its own, permanent value . . . since this value is not wiped out by the later interpretation of the New Testament, which, on the contrary, gave the Old Testament its full meaning, so that it is a question rather of reciprocal enlightenment and explanation" [II].

A second dimension of our dialogue — the true and central one — is the meeting between present-day Christian Churches and the present-day people of the Covenant concluded with Moses. It is important here "that Christians — to continue the post-conciliar directives — should aim at understanding better the fundamental elements of the religious tradition of Judaism, and learn what fundamental lines are essential for the religious reality lived by the Jews, according to their own understanding" [Introduction]. The way for this mutual knowledge is dialogue. I thank you, venerated brothers and sisters, for carrying it out, you too, with that "openness and breadth of spirit," with that "tact" and with that "prudence" which are recommended to us Catholics by the above-mentioned directives. A fruit of this dialogue and an indication for its fruitful continuation is the declaration of German bishops quoted at the beginning "on the relationship between the Church and Judaism" in April of this year. It is my eager desire that this declaration should become the spiritual property of all Catholics in Germany!

I would also like to refer briefly to a third dimension of our dialogue. The German bishops dedicate the concluding chapter of their declaration to the tasks which we have in common. Jews and Christians, as children of Abraham, are called to be a blessing for the world [cf. Gen. 12:2 ff.], by committing themselves together for peace and justice among all men and peoples, with the fullness and depth that God himself intended us to have, and with the readiness for sacrifices that this goal may demand. The more our meeting is imprinted with this sacred duty, the more it becomes a blessing also for ourselves.

4. In the light of this promise and call of Abraham's, I look with you to the destiny and role of your people among the peoples. I willingly pray with you for the fullness of Shalom for all your brothers in nationality and in faith, and also for the land to which Jews look with particular veneration. Our century saw the first pilgrimage of a pope to the Holy Land. In conclusion, I wish to repeat Paul VI's words on entering Jerusalem: "Implore with us, in your desire and in your prayer, respect and peace upon this unique land, visited by God! Let us pray here together for the grace of a real and deep brotherhood between all men, between all peoples! . . . May they who love you be blessed. Yes, may peace dwell in your walls, prosperity in your palaces. I pray for peace for you. I desire happiness for you" [cf. Ps. 122:6-9].

May all peoples in Jerusalem soon be reconciled and blessed in Abraham! May he, the ineffable, of whom his creation speaks to us: he, who does not force mankind to goodness, but guides it: he, who manifests himself in our fate and is silent, he, who chooses all of us as his people; may he guide us along his ways to his future!

Praised be his Name! Amen.