Note from the Vatican Secretary of State


Following the reactions aroused by the recent Decree of the Congregation for Bishops, with which the excommunication of the four Bishops of the Fraternity of Saint Pius X was remitted, and in relation to the negationist and reductionist declarations concerning the Shoah on the part of Bishop Williamson of the same Fraternity, it is held opportune to clarify certain aspects of the matter.

1. Remission of the excommunication.

As previously published, the Decree of the Congregation for Bishops, dated January 21, 2009, was an act by which the Holy Father benignly met the reiterated request on the part of the Superior General of the Fraternity of Saint Pius X.

His Holiness wished to remove an impediment that was prejudicing the opening of a door to dialogue. He now awaits from the four Bishops an expression of equal willingness in a total adhesion to the doctrine and discipline of the Church.

The extremely grave penalty of excommunication latae sententiae, which the four bishops incurred on June 30, 1988, declared formally on July 1 of the same year, was a consequence of their illegitimate ordination by Mons. Marcel Lefebvre.

The rescission of the excommunication has freed the four Bishops from a  very grave canonical penalty, but has not changed the juridical situation of the Fraternity of Saint Pius X, which, at the present moment, does not enjoy any canonical recognition in the Catholic Church. Also, the four Bishops, while relieved of the excommunication, do not have a canonical function in the Church and do not licitly exercise a ministry in her.

For future recognition of the Fraternity of Saint Pius X,  the full recognition of Vatican Council II and the Magisterium of Popes John XXIII, Paul VI, John Paul, John Paul II, and of Benedict XVI himself, is an indispensable condition.

As already affirmed in the decree of January 21, 2009, there will not be lacking from the Holy See, in ways judged opportune, an exploration with the interested parties of the questions still open, so as to be able to reach a full and satisfactory solution to the problems which have given rise to this painful fracture.

3. Declarations on the Shoah. 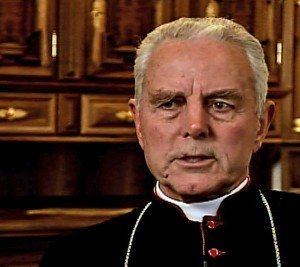 The positions of Mons. Williamson on the Shoah are absolutely unacceptable and are firmly rejected by the Holy Father,  as He himself remarked this past January 28 when, referring to that heinous genocide, he reaffirmed His full and indisputable solidarity with our Brothers who received the First Covenant, and affirmed that the memory of that terrible genocide must prompt “humanity to reflect on the unpredictable power of evil when it conquers the heart of man,” adding that the Shoah remains “for all a warning against forgetfulness, against denial or reductionism, because violence against a single human being is violence against all.”

Bishop Williamson, for admission to an episcopal function in the Church, must publicly and unequivocally distance himself from his positions concerning the Shoah, not known to the Holy Father at the moment of the remission of the excommunication.

The Holy Father requests that all the faithful accompany him in prayer, so that the Lord will illuminate the way of the Church. May the Pastors and all the faithful grow in their commitment to support the delicate and burdensome mission of the Successor of the Apostle Peter, who is “custodian of unity” in the Church.