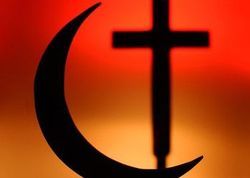 "I will cast terror into the hearts of those who disbelieve. Therefore strike off their heads and strike off every fingertip of them."
"Allah" (Qur'an 8:12)

"Fight everyone in the way of Allah and kill those who disbelieve in Allah."
Muhammad (Ibn Ishaq 992)

"Thou shalt love thy neighbor as thyself."
Jesus (Matthew 5:14)

Each year, thousands of Christian homes and churches are torched or bombed by Muslim mobs, and hundreds of Christians, including dozens of priests, pastors, nuns and other church workers are murdered at the hands of Islamic extremists. The so-called justification varies, from charges of apostasy or evangelism, to purported "blasphemy" or "insulting" Islam. Innocent people have even been hacked to death by devout Muslims over cartoons.

Yet, there is little if any violent retaliation from religious Christians to the discrimination, kidnapping, rape, torture, mutilation and murder that is routinely reported from nations with Muslim majorities. Neither is there is any significant deadly terrorism in the name of Jesus, as there is in the stated cause of Allah each and every day. Muslim clerics in the West do not fear for their safety as do their Christian counterparts.

The "Christian world" and the Islamic world contrast sharply in other ways as well, from the disparate condition of human rights and civil liberties to economic status. An astonishing 70% of the world's refugees are Muslims - usually seeking to live in Christian-based countries.

These sharp differences are almost certainly rooted in the underlying religions, which begin with the disparate teachings and examples set by Jesus and Muhammad...

Whether true or not, everything that secular critics say they don't like about Christianity, from women's issues to slavery, is not only a tangible part of Islam, but usually magnified.

While the Catholic Church is demonized for not allowing female priests, the fundamentalists of Islam force women into burqas and blow up schools that educate girls. Even activists known for championing women's rights in the Muslim world still rationalize keeping captured women as sex slaves, since it is explicitly permitted in the Qur'an. And, while Christians object to extra-marital sex, only Islamic purists plant consenting adults in the ground and stone them to death.

Theocracy (in the form of Sharia) really is the the explicit goal of Islamic teaching, whereas Christianity leaves room for the separation of religion and government (Mark 12:17, John 18:36). Terrorism really is an expression of devotion to Allah (here's an example) - and not just criminal activity or warfare by disinterested parties with a nominal religious identification (i.e. "born a Catholic").

While Christianity believes in the reality of eternal damnation, Islam not only mentions the terrible fate awaiting unbelievers in nearly every other chapter of the Quran, but also includes vivid descriptions of torture at the hands of Allah.

The two religions contrast sharply even in their positive aspects. The morality of the Qur'an is frustratingly obscure for those who try to compare it to what is contained in the Bible. Most of Islam's holiest book is devoted toward distinguishing and heaping abuse on unbelievers. There are no verses that promote universal love and brotherhood. The few verses that are sometimes held up as examples of tolerance and peace generally require separation from textual and historical context.

The difference between Christianity and Islam starts at the top:

Muslims are told that Muhammad - a slave-owner, sexual glutton, thief and killer - is the most "beautiful pattern of conduct" and "example" for mankind to follow (Qur'an 33:21), as well as the "exalted standard of character" (Qur'an 68:4).

Christians are told to emulate Jesus - a pacifist and servant - and "walk, even as he walked" (1 John 2:6). Unlike Muhammad, who ordered military assaults against Christians, for example, Jesus told his followers not to resort to violence and to pray for one's enemies.

These two men could hardly have been more different in how they lived or in what they taught others. Why should we not then expect starkly contrasting legacies - from the conduct of their closest companions to the livability of modern-day countries influenced by the predominance of one founder's teachings over the other?

As Wafa Sultan (who describes herself as a Muslim who does not adhere to Islam) puts it: "The problem with Christians is they aren't as good as Jesus. But thank God most Muslims are better than Muhammad."