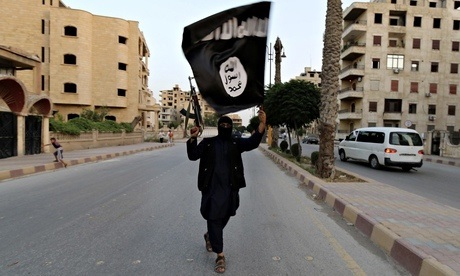 As Hitler and Stalin rose to bloodthirsty power, some opinion-shapers in the West became apologists for these demonic movements. They tried to make horrendous evil appear to be simply 'another worldview.' They desensitized the West's discernment about fast approaching dangers - until it was too late.

The prophetic words of Isaiah have pressing importance for the situation we face in our day: "For behold, darkness will cover the earth and deep darkness the peoples" (Isaiah 60:2). The black wave of jihadi Islam is covering the Middle East. It bubbles up in Belgium and in the Netherlands, and spreads across France, England and Germany.

Western leaders have unwittingly masked the danger facing Western society. They have made light of the Islamist menace and have soft-pedaled the jihadi threats. "The watchmen are blind. All of them know nothing. All of them are mute dogs unable to bark, dreamers lying down who love to slumber" (Isaiah 56:10).

Paul tells us clearly, "If the trumpet does not sound a clear call, who will get ready for battle?" (1 Corinthians 13:8). What are the mujahidin (the jihad fighters) up to? What are their goals? How can we pray about these clear and present dangers?

Politicized Spin about the Islamist Faith

On September 17 2001 President George W. Bush addressed the Islamic Center of Washington regarding the jihadi terrorists of 9/11, "These acts of violence against innocents violate the fundamental tenets of the Islamic faith. And it's important for my fellow Americans to understand that . . . The face of terror is not the true faith of Islam. That's not what Islam is all about. Islam is peace. These terrorists don't represent peace. They represent evil and war. When we think of Islam we think of a faith that brings comfort to a billion people around the world. . ."

President Bush's declaration that jihad violates the Islamic faith is understandable given the horror of that Twin Towers moment, but his read is totally inaccurate.

British PM Tony Blair spoke about jihadi terror at the Labour Party National Conference, July 16, 2005, just a few days after the London Islamist bombings: "I want also to work with other nations to promote the true face of Islam worldwide… In the end, it is by the power of argument, debate, true religious faith and true legitimate politics that we will defeat this threat. That means not just arguing against their terrorism, but their politics and their perversion of religious faith."

German Chancellor Angela Merkel said Germans should be careful to differentiate between Islamists and the religion itself. "We must be incredibly careful that we don't lump everyone together," the Chancellor said. "The Islamists are not the Islam of Germany." Merkel's spokesman, Steffen Seibert, said that that the Chancellor had in no way expressed "criticism of Islam …You cannot interpret the Chancellor as a critic of Islam because she naturally has respect for an important world religion," Seibert said in Berlin

In a recent comment about jihadi Islam in light of the beheading of US newsman James Foley, U.S. President Obama declared, "Let's be clear about ISIL…ISIL speaks for no religion.  Their victims are overwhelmingly Muslim, and no faith teaches people to massacre innocents.  No just God would stand for what they did yesterday, and for what they do every single day.  ISIL has no ideology of any value to human beings.  Their ideology is bankrupt…From governments and peoples across the Middle East there has to be a common effort to extract this cancer, so that it does not spread.  There has to be a clear rejection of these kind of nihilistic ideologies.  One thing we can all agree on is that a group like ISIL has no place in the 21st century."

This list could go on. But this much is clear:

Western politicians who have no theological training to speak of, and who are not experts on classical Islam, are making sweeping theological pronouncements for political purposes about what is and what is not kosher Islamic faith. Unfortunately, these statements unwittingly conceal the classic Quranic nature of jihadi Islam.

Did Mohammed Understand the True Face of Islam?

A careful but simple survey of the Quran's teaching on jihad shows that jihad (holy war) is a fundamental tenet of the Islamic faith (see "A Perspective on Islam" by Avner Boskey).

The highest calling a Muslim can engage in is armed jihad, according to the Hadith (authoritative Islamic book accompanying the Quran) "Muhammad once was asked: 'What is the best deed for the Muslim next to believing in Allah and his messenger?' His answer was: 'To participate in jihad in Allah's cause'" (al-Bukhari 1:2:25).

Martyrdom in jihad is considered the highest of goals. "So narrated Anas bin Malik, 'The prophet said, "Nobody who dies and finds good from Allah …would wish to come back to this world even if he were given the whole world and whatever is in it - except the martyr who, on seeing the superiority of martyrdom, would like to come back to the world and get killed again" (al-Bukhari 4:52:72).

Decapitating unbelievers is totally acceptable in jihad. "When you meet the unbelievers (in battle), strike off their heads; then when you have made wide slaughter among them, carefully tie up the remaining captives. Afterwards either set them free as a favor or let them ransom (themselves) until the war terminates" (Surah 47:4).

Terror is considered a necessary psychological weapon to intimidate and crush all opposition. Allah says, "I will instill terror into the hearts of the unbelievers. Therefore strike off their heads and strike off every one of their fingertips . . . Strike terror (into the hearts of) the enemies of Allah and your enemies" (Surah 8:12, 60).

Jihad continues until full world conquest. "Make war on them until idolatry does not exist any longer and Allah's religion reigns universally" (Surah 8:39).

Killing and being killed is what mujahidin look forward to. "(For) the believers …theirs (in return) is Paradise. They fight in his cause, so they kill (others) and are killed … (Surah 9:111). "So narrated Al-Mughira bin Shu'ba, 'Our prophet told us about the message of Allah that "… whoever amongst us is killed will go to Paradise" (al-Bukhari 4:52:72).

Is the Beheading of Unbelievers the True Face of Islam?

President Obama declared (above), "ISIL speaks for no religion… (N)o faith teaches people to massacre innocents.  No just God would stand for what they did yesterday…Their ideology is bankrupt… There has to be a clear rejection of these kind of nihilistic ideologies." Yet the Quran teaches without compromise that decapitation is an integral part of the jihad warrior's arsenal.

One of Mohammed's closest generals and most brilliant military commanders was Khalid bin al-Walid (خالد بن الوليد), also known as Sayf Allāh al-Maslūl (or the drawn sword of Allah; سيف الله المسلول).  Between 629-636 AD/CE he was responsible for over one hundred military victories, including the conquests of Arabia, Persian Mesopotamia, Roman Syria, Yarmouk, Damascus and Jerusalem.

During the Battle of Mu'tah, al-Walid broke nine swords in hand-to-hand combat. At the Battle of Ullais it is recorded that he oversaw the decapitation of 70,000 Persian soldiers (mentioned in Muhammad ibn Jarir al-Tabari's History of the Prophets and Kings, Vol. 2, p. 560-62: Chapter 22: The River of Blood).

Though modern Presidents, Prime Ministers and Chancellors gag at the thought of religious beheadings, according to classical jihadi Islam ISIS/ISIL believes and carries out the commands of Mohammed and the battle tactics of his most valiant general.

YHVH the God of the Hebrews is poles apart from the angel who demanded Mohammed's obedience. The God of the Bible does not command His followers to spread the message of Yeshua by cutting off people's heads. But a majority of Muslims believe as an article of Quranic faith that Allah commands decapitations.

It is therefore no surprise that jihadis take the Quran literally in their conquest of the Middle East.

Islamism, Europe and the Jews

The jihadi Islam that Hamas enforces in Gaza is quite similar to that of ISIS/ISIL. Though there are some slight differences of strategy and methodology (similar to the original differences between Marxist-Leninists, Trotskyites and Maoists), they share the common goals of jihad, international caliphate and shari'a.

For those who would like to get a better grasp of current Islamist developments in Europe, I highly recommend two online videos. One is from CBN, and is entitled "Belgistan? Sharia Showdown Looms In Brussels."

The other is a four program series (45 minutes each) in Hebrew (or with English subtitles) by Zvi Yehezkeli and David Deryi. Yehezkeli is the Arab affairs specialist for Israeli Channel Ten. He spent months travelling undercover through Western Europe, interviewing Muslims about the spiritual direction of Islam. The program series is called "Allah Islam" in Hebrew, and either Europe's Takeover by Islam or Israeli infiltrates European Muslim community with English subtitles.

Hamas, Jihad and the Jews

Hamas' goals and strategies are impeccably Islamist and jihadi. The Hamas Charter states clearly (See also "A Messianic Perspective on the New Hamastan"):

What is Jihadi Ceasefire?

The Western world finds it nearly impossible to comprehend what Hamas believes. So it tries to get Hamas to make PR statements abandoning its own Islamic faith and principles. However, Hamas will never recognize Israel, never live in peace with a Jewish state, and never cease trying to murder the daughter of Zion.

Two nuggets of intelligence have also recently come out.

In April 2014 Hamas and the Palestinian Authority (PA) signed an agreement of reconciliation, promising to share power and work together. Nevertheless, recently Hamas went to war against Israel, ignoring these agreements.

The PA has major jitters that Hamas would win free elections were they to be held in the West Bank. Something similar already happened in Gaza in 2005. Hamas won the election and then proceeded to kneecap, torture and jail PA operatives, throwing many off of Gaza's higher buildings in classic Mafia style.

But there is now no need for the PA to worry about what might happen in the future. The Israeli Shin Bet (FBI equivalent) recently uncovered a Hamas plot involving over 100 Hamas operatives in the West Bank who were plotting a violent takeover and assassination of PA leaders, murders on the Temple Mount, and violent riots and attacks on the IDF and Israelis in Jerusalem, the West Bank and Israel proper.

Hamas was getting ready to murder the PA leadership (with which it has been cooperating in Cairo over the past weeks) and to set up a jihadi terror state north of Jerusalem,. Senior Hamas leader Salah al-Aruri, based in Turkey, directed the coup as well as the kidnapping of the three teenagers. Hamas operatives in Zarka, Jordan as well as in Jenin, Ramallah and Hebron were all involved.

"Can an Ethiopian change his skin color, or a leopard his spots?" (Jeremiah 13:23)

No American would have entertained the thought of negotiating with Osama bin Laden. And no Jewish government in their right mind would negotiate with Pharaoh of Egypt, with Haman, or with Hitler. This is a fight to the finish, with no holds barred. It is like playing poker with a psychopathic murderer who, if he doesn't like the way the cards are going, grabs a submachine-gun and tries to rub out his partner.

For dyed-in-the-wool jihadi warriors, an asymmetrical approach to warfare with Israel - one which results in many Gazan civilian casualties - is actually a gateway to religious merit and reward. This is not a cycle of violence, or simply a deep animosity between Isaac and Ishmael. It is a fight between (on one hand) Islamist kamikazes who don't surrender, a group of post-Hiroshima-like zombies, and (on the other hand) the Jewish people returning to their Promised Land in fulfilment of ancient Hebrew prophecies.

Your prayers and support hold up our arms and are the enablement of God to us in the work He has called us to do!