The Jews: What Will their Acceptance Mean?

The Jews and the Church: "What Will their Acceptance Mean?" (Romans 11:15)

I wrote the following reflection on the issue of the conversion of the Jews after reading the article by Msgr. Charles Pope entitled: On the Evangelization of the Jewish People: The Surprising View of the Pope 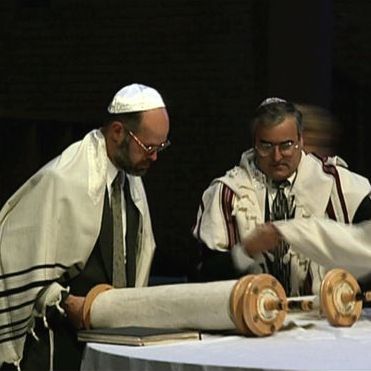 The author describes his response to the Holy Father's comments on the conversion of the Jews. These are the passages he cites:

In this regard, the question of Israel’s mission has always been present….Here I should like to recall the advice given by Bernard of Clairvaux to his pupil Pope Eugene III on this matter. He reminds the Pope that his duty of care extends not only to Christians, but: “You also have obligations toward unbelievers, whether Jew, Greek, or Gentile” (De Consideratione III/1, 2). Then he immediately corrects himself and observes more accurately: “Granted, with regard to the Jews, time excuses you; for them a determined point in time has been fixed, which cannot be anticipated. The full number of the Gentiles must come in first. But what do you say about these Gentiles?. . . …(De Consideratione III/1, 3).

Hildegard Brem comments on this passage as follows: “In the light of Romans 11:25, the Church must not concern herself with the conversion of the Jews, since she must wait for the time fixed for this by God, ‘until the full number of the Gentiles comes in’ (Rom 11:25)….(quoted in Sämtliche Werke, ed. Winkler, I, p. 834).

….In the meantime, Israel retains its own mission. Israel is in the hands of God, who will save it “as a whole” at the proper time, when the number of the Gentiles is complete….the evangelization of the Gentiles was now the disciples’ particular task…. (Jesus of Nazareth, Vol 2, pp. 44-46).

This is my contribution to the discussion:

I read your reflections with great interest.

There is an essential difference between the individual Jew who enters the Church and the Jewish people as a whole. The Catholic and Jewish communities have long been regarded as mutually exclusive, Judaism and Catholicism as mutually exclusive religions. The individual Jew can change his community and change his religious identity: he can decide to be a Catholic rather than a Jew. But the Jewish People as a whole cannot change their communal identity or change their religion, for that would eliminate the Jewish People. When St. Paul prophesied that the Jewish people as a whole will join the Church, he probably had the Church in Jerusalem in mind, which, in his time, was a Jewishly observant Christian community (Acts 21). What he envisioned was that it will someday include not only a small proportion, but the entire Jewish People. He did not foresee the Jewish people abandoning Judaism for Catholicism, or relinquishing their historical identity to become Catholic. Rather, he prophesied that the Jews would someday be moved by the Holy Spirit to see that Christian faith made them better Jews, and that they would participate in the Church as a way of rededicating themselves to their own traditions in the Spirit of the Son, who said:

Think not that I have come to abolish the law and the prophets; I have come not to abolish them but to fulfil them. For truly, I say to you, till heaven and earth pass away, not an iota, not a dot, will pass from the law until all is accomplished. Whoever then relaxes one of the least of these commandments and teaches men so, shall be called least in the kingdom of heaven; but he who does them and teaches them shall be called great in the kingdom of heaven. (Matt. 5:17-19)

But that, won’t happen, St. Paul tells us, until all the Gentiles have entered the Church. Why one should depend upon the other is not at all clear. It seems that there are two possible explanations: Either the presence of the Jewish People in the Church would, for some mysterious reason, interfere with the evangelization of the Gentiles, or the sanctification of the Gentiles by universal participation in the Church is a necessary prerequisite for the collective participation of Israel in the Church. St. Paul , I think, suggests the latter when he writes, “For if their rejection means the reconciliation of the world, what will their acceptance mean but life from the dead? “ (Romans 11:15)

Life from the dead is a new order of (spiritual) life not merely the revival or renewal of life as it was lived before. What will that new order of spiritual life be? A perfect reconciliation of the Law of Moses with the Law of Grace, obligatory and voluntary service to G-d, external forms and interior devotion, reverent fear of the Transcendent Father with perfect love for His Abiding Presence among us. Both Catholics and Jews strive to resolve these polarities, and the potential and the encouragement to do so exists in both traditions (there are many loving Jews, and many Catholics eager to fulfill G-d’s commands), but, that having been said, the Jewish tradition is rather more inclined to emphasize obedience and reverent fear before the Transcendent Father, while Catholicism is rather more inclined to emphasize loving devotion to G-d through the abiding Presence of His Son.

The Jewish People will not be reconciled with the Church until man is capable of reconciling these polarities, for until a human being can acknowledge that G-d’s Justice is His Mercy, that His Law articulates His Love, that the awesome mystery of the Transcendent Father is inseparable from the unfathomable Love revealed through His Incarnate Son, the New Covenant cannot be perfectly reconciled with the Old Covenant. And that may well be impossible so long as mankind still includes people who live unaware of both G-d’s Law and His Love: Gentiles who have not entered the Church. Indeed, it may well be that the early Jewish Christian community was so short lived because mankind, steeped in paganism, was not yet capable or worthy of having such a community in its midst, a community possessed of so perfect a grasp of the unity of things Divine that it could resolve such apparent opposites into a perfectly integrated way to G-d.

The Jewish People will enter the Church when they become aware of the Christian Truth which, as St. Paul says, has been withheld from them. That’s a gradual process. It begins when a religious, traditional Jew receives the grace to see beyond historical animosities and the apparent contradictions of religious teachings, and, daring to trust intuitions which only the Holy Spirit could bestow, discovers the treasure of Catholic faith and the contribution it makes to his Jewish faith and practice.

What can the Church do to cooperate with the Spirit that has illumined him?