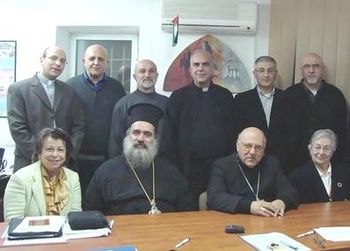 Late in 2009, a small group of Palestinian Christian clergy and laity banded together to produce a document entitled "Kairos Palestine." Basically, it promoted familiar Palestinian aspirations, dressed up with some theological flourishes. Even by current Palestinian standards, it was an extreme statement. For instance, it avoided endorsement of the two-state solution for Israel and the Palestinians.

Now, two years later, the hard core of the original authors has held an anniversary conference in Bethlehem together with foreign supporters. This time they constituted themselves a tribunal before which to arraign all the churches of the world for not showing enough enthusiasm for their original document. Thus mendacity morphs into megalomania.

The utterances emerging from this conference manifest a mixture of triumph and fury. Triumph, because a number of church bureaucrats, mainly at the Middle East desks of some Protestant churches, made considerable efforts to promote their document. Fury, because the reception in churches at large has been mostly lukewarm. For instance, an attempt to promote the document in the Netherlands produced a backlash, as prominent church leaders rejected its propositions.

Indeed, there has been considerable criticism of the document by such serious Christian theologians as troubled themselves to deal with it. This writer was one of the earliest to expose its pretentions and deceptions.

Triumph and fury characterized the opening statement of the anniversary conference by Rifat Odeh Kassis. On the one hand, he proclaimed that "Kairos Palestine is transforming itself into a broad umbrella movement" and anticipated the rise of a "Global Kairos Coalition." On the other, he berated churches far and wide. "We can no longer accept the silence of the church!" "We can't accept any financial assistance from any church or organization without its commitment to work toward ending the occupation." "We can't accept the arguments of any church that wants to be 'balanced' in its views," and so on and so on.

Kassis also demanded monopoly rights over Christian pilgrimage. "We shall speak out loudly against any church organizing tours to the Holy Land without seeing us," he threatened. Moreover, although the online summary of his speech does not mention it, the local press reported that he called for "a campaign of total boycott of Israel" (hamlat muqata'a shamila li-Isra'il).

Carried away by this hysterical tone, Kassis overlooked that even the Palestinian churches will defy one of those strictures. All these churches, including his own, are thoroughly dependent on financial contribution from abroad. In some churches, they make up around ninety percent of the budget. No Palestinian church is going to condition those massive contributions on support for Palestinian political demands.

This is nothing new for Kassis. Already in June 2011, Kassis had set himself up as the arbiter of the archbishops of the world with a lengthy attack on Dr. Rowan Williams, the Archbishop of Canterbury. Williams had given an interview to the BBC in which he showed a remarkably well-informed understanding of how the rise of Islamic extremist movements is impacting negatively on the Christian populations in the Middle East.

Amongst his remarks, the archbishop ventured to hint that Muslims are subtly replacing Christians in Bethlehem. He was saying nothing new, indeed nothing that is not quite widely known, but it was enough to provoke a long reprimand from Kassis. Describing himself as "deeply troubled" and "shocked" by the archbishop, he insisted: "Your statements about Bethlehem are particularly faulty and offensive especially when you say that the movement of Muslims into the Bethlehem area, where space is limited, is forcing Christians to leave."

Besides fury also despair appeared later in the letter, where Kassis wrote: "We are no longer expecting support from Church leaders around the world." This is a remarkable confession that the little band of authors of Kairos Palestine is far from getting the responses that it wished for.

Now, the dedicated Kairos Palestine website does have a list of Palestinian Christians who have signed onto their document, as well as a second list of Muslims and foreign Christians who support it. On closer inspection, however, the foreigners turn out to be the usual suspects. Their number is under two thousand and has not grown much recently. Only about fifty style themselves as "Rev(erend)" or "F(athe)r," mostly among the early supporters. Two are "bishops": one is retired, the other heads a church created by himself. It confirms the muted response from foreign church leaders. As for the listing of locals, we imagine that Israeli intelligence has been gleefully watching as Kairos Palestine collects and publishes the names of potential troublemakers.

The organizers of the conference, too, were the same old faces. Besides Kassis, they included Michel Sabbah, the former Latin Patriarch, Archbishop Attalah Hanna and Rev. Naim Ateek. Hanna no longer even claims to speak on behalf of the Greek Orthodox Patriarchate. Ateek retired from the local Anglican church after failing to be elected bishop. In short, this is a small coterie that would like itself, rather than the Heads of Churches in Jerusalem, to be seen as the authentic leaders of local Christianity. So it is no wonder that church leaderships elsewhere have hesitated to embrace them.

Rather, it is among other would-be alternative leaderships that the Kairos Palestine phenomenon finds its enthusiasts. This includes bureaucratic nuclei in churches, militant church-based NGOs like Pax Christi and, above all, the bureaucracy of the World Council of Churches (WCC) in Geneva. This body claims to speak for hundreds of millions of Christians worldwide, but in fact it is only a few score officials in Geneva who devote a remarkable amount of their time, efforts and resources to promoting the Palestinian cause.

Not by accident, the closing statement of the Kairos anniversary conference placed the beginnings of Kairos Palestine (in 2009) explicitly in the context of the "Amman Call of 2007," the "Berne Perspective of 2008" and the "Palestine Israel Ecumenical Forum" (founded in 2007). All three of these were initiatives of the WCC. So also, ultimately, was the Kairos phenomenon, organized with the help of the WCC's offshoot in Jerusalem, the "Inter-Church Centre." Kassis himself has been an occasional employee of the WCC and his denunciations of foreign churches were incorporated into that closing statement. The WCC will doubtless promote the statement as eagerly as the original Kairos document. Churches of the world beware: the WCC is checking you out.

The truly appalling murderous regimes in Arab countries, by contrast, were never the subject of WCC "calls," "perspectives" or "forums." Konrad Raiser was General Secretary of the WCC (1992-2003) during the last years of Soviet Communism. Shortly after leaving office (July 2004), he made a half-hearted confession that the WCC had evaded the issue of the Soviet tyranny over Eastern Europe. For even longer, however, the WCC passed over Saddam Hussein's Iraq, the Syria of the Assad dynasty and all the other "Arab Spring" countries.

Instead, the WCC picks on Israel as a trouble-free target. It assumes, correctly, that even though the Kairos Palestine website has supplied the names of nearly three thousand Palestinian activists, the Israeli authorities will not shoot them by the hundred in the style of Arab regimes.

Kairos Palestine presents itself as a spontaneous local phenomenon. But its provenance is more accurately described as "from Geneva via Bethlehem."